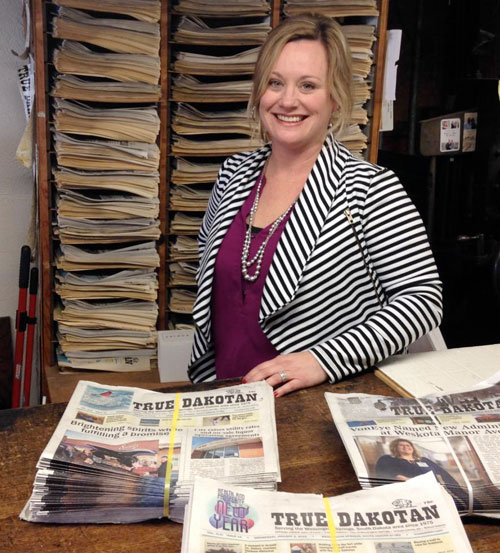 With the rise of digital and social media, the way people access news and information has changed immensely. One in five local newspapers has closed since 2004, according to research from the University of North Carolina.

Some small town newspapers, like True Dakotan, are managing to buck this trend and maintain relevance. Owner Kristi Hine acquired the weekly paper, based in Wessington Springs, several years ago. This acquisition was made possible with the help of GROW South Dakota financing.

Since 1975, True Dakotan has served the cities of Lane, Alpena and Wessington Springs. For 40 years, the Wenzel family owned and operated the paper. When it came time to retire, they wanted to find someone to carry on the business.

The Wenzel’s approached Hine, then a recent transplant to the area, with the idea of taking over the reins. Originally from Arizona, Hine had spent her career in marketing and public relations, working for both private businesses and nonprofits in cities like San Diego, Las Vegas and Phoenix.

While visiting South Dakota with an aunt, Kristi met a “handsome rancher” from Wessington Springs and began a long distance relationship with him from Arizona.

She eventually moved to South Dakota, married and continued working in marketing and public relations. When the Wenzel’s approached her about buying True Dakotan, she decided she couldn’t pass up the opportunity.

“The more I thought about it, the more I realized I needed to do this,” Hine says. “I can’t imagine Wessington Springs without a community newspaper. I feel passionate about that.” 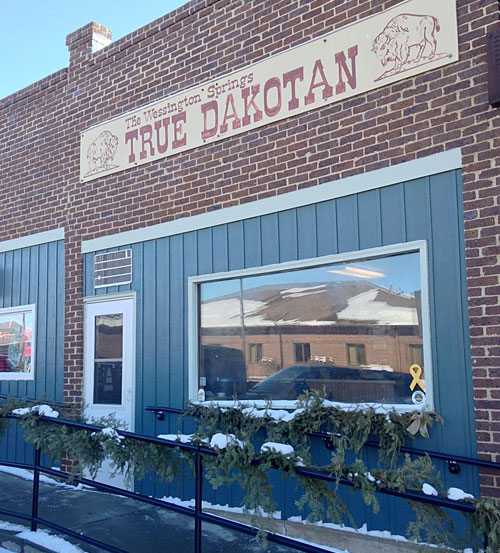 Hine entered into a contract-for-deed, but admits it wasn’t the smartest business move due to the interest rate and timeline for payoff. She says GROW South Dakota was helpful in navigating the process to obtain financing to purchase the business outright and gave her advice on presenting her loan request to the board of directors.

“I’m grateful for that experience. Because of having to present my loan request, I was able to nail down a business plan. I learned more about myself, the business and business financing,” says Hine. “That was a wonderful piece of the financing opportunity with GROW SD.”

Mark Nelson, GROW South Dakota loan officer, says “being able to play a part in making Kristi’s dream of owning the True Dakotan come true is what we strive to do at GROW South Dakota. Allowing these communities throughout South Dakota to continue to grow, sustain and flourish is part of our mission.”

On March 1, 2019, Hine celebrated her four-year anniversary of owning True Dakotan. From the start, she’s been incorporating changes to the newspaper. The design was revised to make the paper easier to navigate. Hine says they’ve also added more photography to enhance storytelling.

The focus of the paper is also hyperlocal. “It’s the only place people can get information about people and places and events in Jerauld County,” explains Hine. “The more we localize, the better we do. That’s exciting to me. Our county is small but stories abound. Sometimes you just have to dig down and find them.”

Hine notes that she’s had an “awesome response” from readers, including notes in the mail from subscribers who have moved away and live in other parts of the country who appreciate being able to keep up on the news in their hometown.

True Dakotan has three full time and two part-time employees and relies on some volunteer contributors as well. Hine hopes to hire a part-time sports writer and photographer to keep expanding coverage and create more value for readers and advertisers.

When Hine’s original business loan comes to maturity, she intends to obtain financing to renovate the historic building on Main Street that houses the newspaper, to ensure the building lasts for decades to come.

Hine views True Dakotan as playing a significant role, not just in reporting news but in supporting businesses and helping create a vibrant, strong community. She notes that 50 years from now people will be looking back at the paper’s archives. “Telling the story of the people of this area is an important job and I take it to heart,” she says.